Originally Published on CNN.com  on July 5, 2017, by Tim Spector

The Hadza seek out the same animals and plants that humans have hunted and gathered for millions of years. Importantly, the human-microbe tango that played out here for aeons probably shaped aspects of our immune system and made us who we are today. The significance of being in Hadza-land was not lost on me.

Unlike the Hadza, who sleep around the fire or in grass huts, I was given a tent and told to zip it up tight as there were scorpions and snakes about. I had to be careful where I stepped if I needed a nocturnal pee. After an interesting but restless night’s sleep, a large pile of baobab pods had been collected for my breakfast.

The baobab fruit is the staple of the Hadza diet, packed with vitamins, fat in the seeds, and, of course, significant amounts of fibre. We were surrounded by baobab trees stretching in the distance as far as I could see. Baobab fruit have a hard coconut-like shell that cracks easily to reveal a chalky flesh around a large, fat-rich seed. The high levels of vitamin C provided an unexpected citrus tang. 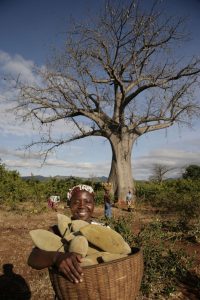 The Hadza mixed the chalky bits with water and whisked it vigorously for two to three minutes with a stick until it was a thick, milky porridge that was filtered — somewhat — into a mug for my breakfast. It was surprisingly pleasant and refreshing. As I wasn’t sure what else I would be eating on my first day, I drank two mugs and suddenly felt very full.

Do you want to add the nutritional performance of Baobab Superfruit to your products? Complete the form below and learn more about this exciting ingredient.