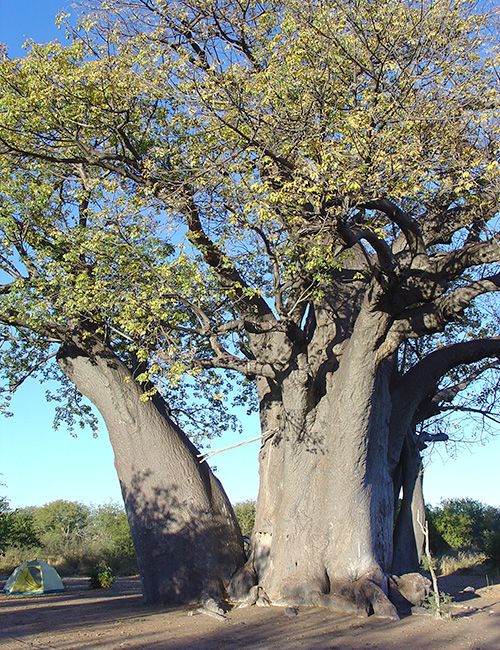 The African Baobab is a key stone tree species of African sub-Saharan regions. Known as the “tree of life” it holds a special status and role in the traditions and livelihoods of communities across Africa. Adansonia digitata is the most common species of African Baobab and is found in 31 African countries. They are recognizable by their distinctive swollen stems. Occurring naturally in the dry areas of Madagascar, Africa and Australia, they store massive amounts of water in their stems to cope with seasonal droughts.

The tree’s fruits are large pods known as ‘monkey bread’ or ‘cream of tartar fruit’ and they produce a dry fruit pulp that is highly nutritious [see Baobab Nutrition]. We now know that Baobab Fruit was on sale in the market in Cairo as early as the 16th century, apparently brought by slave caravans out of the Sudan.

All parts of the tree can be used. The dry fruit pulp has many uses; the most popular in most Africa regions is as a sherbert-like drink that is rich in vitamin C. The seeds can be pressed into oil that has wonderful nutrient and topical properties. The hard outer shell is waterproof and can be made into a variety of domestic articles such as calabashes and castanets. Both the seeds and the leaves can be eaten. The bark can be harvested without killing the tree, and pounded to make rope.

Two things really make the Baobab stand out. Their amazing size and age.

Some Baobab trees grow so large that they become national landmarks:

The age of Baobabs was always a debating point over the years. In the absence of annual rings to count the scientific evidence was always tenuous. However in late 2004, Grootboom, a well-known and extremely large African baobab located in northeastern Namibia collapsed unexpectedly. Ten wood samples collected from different areas of the trunk were processed and investigated by accelerator mass spectrometry radiocarbon dating. The radiocarbon dates of three samples were greater than 1000 years BP (radiocarbon years before present, i.e., before AD 1950). The corresponding calibrated calendar age of the oldest sample was 1275 +/- 50 years, making Grootboom the oldest known angiosperm tree with reliable dating results.

During the early summer (October to December in southern hemisphere) the tree bears very large, heavy, white flowers. These open during the late afternoon to stay open for one night. The pendulous, showy flowers have a very large number of stamens. They have a sweet scent but later emit a carrion smell, especially when they turn brown and fall after 24 hours. Researchers have shown that they appear to be primarily pollinated at night by fruit bats.

Sustainable harvesting to protect the trees.

We control every step of the supply chain.

Nutrient-dense with a high Antioxidant profile.

Do you want to add the nutritional performance of Baobab Superfruit to your products? Complete the form below and learn more about this exciting ingredient.